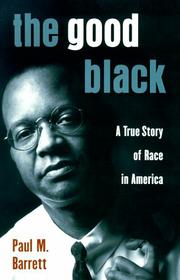 Larry Mungin spent his life preparing to succeed in the white world. He looked away from racial inequality and hostility, believing he’d make it if he worked hard and played by the rules. He rose from a Queens housing project to Harvard Law School, and went on to practice law at major corporate firms. But just at the point when he thought he’d make it, when he should have been considered for partnership, he sued his employer for racial discrimination. The firm claimed it went out of its way to help Larry because of his race, while Larry thought he’d been treated unfairly. Was Larry a victim of racial discrimination, or just another victim of the typical dog-eat-dog corporate law culture? A thought-provoking courtroom drama with the fast pace of a commercial novel, The Good Black asks readers to rethink their ideas about race and is a fascinating look at the inner workings of the legal profession.

“Barrett … skillfully and dispassionately tells Mungin’s story in The Good Black, with chapters alternating among present, recent past, and distant past.” —The New York Times Book Review, Richard D. Kahlenberg

“A remarkably clear portrait of the vagaries of litigation… [in which Barrett] renders technical legal issues thoroughly accessible to a lay audience, but also offers insights that lawyers will find instructive… Part case comment, part biography, The Good Black is also part snapshot of race relations at the end of the twentieth century. It pictures a reality that is simultaneously encouraging and disappointing.” —Harvard Magazine

“A fascinating behind-the-scenes glimpse of race and character in a court discrimination case… This is no typical racial discrimination suit in which the employer is caught conspiring against black employees, leading to a court award of millions. Rather, its a study in the moral ambiguities of race in America… Barrett, a Wall Street Journal legal affairs writer who coincidentally was Mungins friend at Harvard Law School, manages to keep a discreet distance from his subject while also enjoying access to him and other parties of the court case. Suspenseful, highly entertaining courtroom drama.” —Kirkus Reviews

“In a crackling courtroom drama that illustrates just how ambiguous issues of race can be, Wall Street Journal deputy legal editor Barrett examines the case of Larry Mungin, his roommate at Harvard Law School…While Barrett admits “there wasn’t any direct evidence” that Mungin was treated differently because of his race, he nevertheless believes that race probably was an important factor in the firm’s “callous” marginalization of Mungin. Therefore, concludes Barrett, the appeals court should have let the jury’s verdict stand. Readers’ opinions will be sharply divided. Because the case involved not egregious racist acts but rather more subtle forms of alleged discrimination, law firms (and many other employers) will want to scrutinize Barrett’s painstaking analysis.” —Publishers Weekly